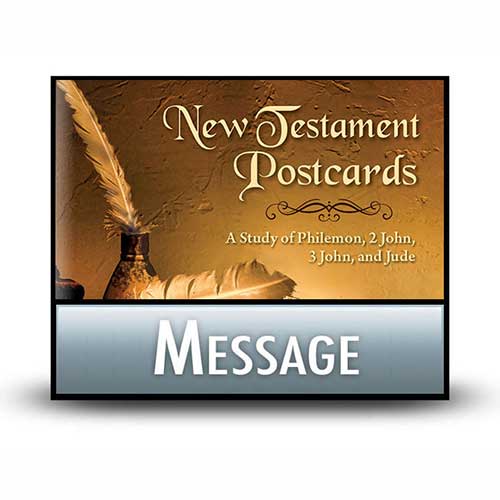 A Postcard to Philemon - CD

The apostle Paul wrote thirteen letters which make up a large part of the New Testament. Paul wrote his letters during the course of approximately fifteen years, between AD 52 and AD 67. About six years before his execution in Rome, Paul sent a personal note to a man in Colossae named Philemon. This little letter—more like a postcard—is the shortest of all of Paul’s writings, but don’t let its size fool you. It contains a magnificent study in forgiveness. In brief, it is a warm appeal that Philemon, a slave owner, accept back into his household a runaway slave named Onesimus, who had become a Christ follower because of Paul’s preaching. Just as Jesus Christ acts as the advocate for Christians before God, Paul acted as Onesimus’s advocate before Philemon. Paul’s letter to Philemon has great practical value for us today. It teaches us about giving others second chances, the equality that believers have in Christ, and the power of the gospel to transcend cultural and socioeconomic boundaries. In short, Paul’s postcard to Philemon reminds us about grace.

See the complete list of resources for this series:
New Testament Postcards: A Study of Philemon, 2 John, 3 John, and Jude

A Postcard to Philemon